Suck Me: Homoeroticism in vampire cinema

This is my belated post for the Vampire blog-a-thon, created and reanimated by him we call "The Master", but who is known to most as Nathaniel, and whose place of unhallowed rest is The Film Experience.


Vampires have long been a symbol of unrestrained and rampant sexuality, both in literature and cinema.

Scenes such as those where Dracula's brides accost Jonathan Harker in Transylvania, as described by Bram Stoker in his 1897 novel Dracula, perfectly encapsulate both a Victorian sensibility and a sense of dangerously unrestrained sexuality:

"They whispered together, and then they all three laughed, such a silvery, musical laugh, but as hard as though the sound never could have come through the softness of human lips. It was like the intolerable, tingling sweetness of waterglasses when played on by a cunning hand. The fair girl shook her head coquettishly, and the other two urged her on...

I was afraid to raise my eyelids, but looked out and saw perfectly under the lashes. The girl went on her knees, and bent over me, simply gloating. There was a deliberate voluptuousness which was both thrilling and repulsive, and as she arched her neck she actually licked her lips like an animal, till I could see in the moonlight the moisture shining on the scarlet lips and on the red tongue as it lapped the white sharp teeth. Lower and lower went her head as the lips went below the range of my mouth and chin and seemed to fasten on my throat. Then she paused, and I could hear the churning sound of her tongue as it licked her teeth and lips, and I could feel the hot breath on my neck. Then the skin of my throat began to tingle as one's flesh does when the hand that is to tickle it approaches nearer, nearer. I could feel the soft, shivering touch of the lips on the super sensitive skin of my throat, and the hard dents of two sharp teeth, just touching and pausing there. I closed my eyes in languorous ecstasy and waited, waited with beating heart."

The homoerotic, and the overtly homosexual, are another central motif of vampirism, and have long been expressed within the extensive canon of vampiric cinema.

Much has been made of the homoerotic elements of Interview with the Vampire, Neil Jordan's languid (some would say turgid) 1994 adaptation of Anne Rice's novel, and starring Tom Cruise and Bratt Pitt. Allegedly at Cruise's insistance, much of the queer subtext of the film was excised, leaving a single, powerful scene between Louis (the pouting Pitt) and Armand (Antonio Banderas) as the only overtly homoerotic moment in the film.

There are far better films, and far more overt displays of homosexuality, elsewhere in the vampire genre.

Here are just a few:

Tom Holland's 1985 horror-comedy Fright Night contains a touching scene where the hero's geekish and misfit sidekick, Evil Ed (Stephen Geoffreys) is seduced by the suavely sensual vampire Jerry Dandrige (Chris Sarandon). Although nothing is expressed overtly, for queer viewers - and many modern viewers - the homoerotic nature of this scene is writ large.

"Hello, Edward. You don't have to be afraid of me. I know what it's like being different. Only they won't pick on you anymore... or beat you up. I'll see to that. All you have to do is take my hand."

There's also a significant homoerotic charge between Dandrige and his 'housemate'/servant, but you really need to watch the film to appreicate it... 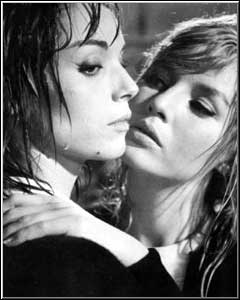 Lesbian vampires are far more common in cinema than gay vampires, as the idea of two women together is both less threatening to straight men and more arousing.

As a case in point, consider Et Mourir de Plaisir (literally To Die with Pleasure... but in the UK known as Blood and Roses) Roger Vadim's somewhat somnulent 1960 take on Sheridan Le Fanu's classic lesbian vampire novella Camilla (which predates Stoker's Dracula, being first published in 1872),

Films such as Tony Scott's The Hunger (1983) are far more explicit in their lesbian content; and Roy Ward Baker's Hammer production Vampire Lovers (1970) displays a gorier, pulpier sensibility - and is also a remake of the Camilla story (see also Jimmy Sangster's sequel, Lust for a Vampire (1971) and John Hough's 1972 follow-up Twins of Evil, all starring Ingrid Pitt) but I still have a soft spot for Blood and Roses.

It's a subtle take on the story, and while some will consider its lyrical style stultifying, its imagery is memorable, its cinematography graceful, and its eroticism is restrained yet sensual. 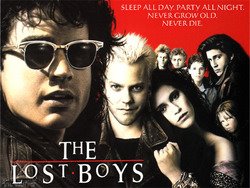 Directed by openly gay director Joel Schumacher in 1987, this is a delightfully excessive film, in which Sam (Corey Haim) a teenager who just happens to have posters of Rob Lowe on his closet door, and who is fond of bubble bath (hello, gay much?) must rescue his older brother Michael (Jason Patric) from the pouting, threatening and seductive gang lead by David (Kiefer Sutherland) who have made him "one of us."

Although some might consider the queer subtext in this film to be fairly well hidden, you can have great fun analysing The Lost Boys.

Is it a vampirism-as-AIDS metaphor? Perhaps it's suggesting that unbridled teenage sexuality inevitably leads to straight boys being lead astray? Is it a 'homosexuality as threat to the traditional family structure' story? Or perhaps it's implying that the absence of a father in the family home leads to boys taking bubble baths and drinking blood?

According to Lee Anna Mariglia, The Lost Boys is a subversive celebration of the gay lifestyle in the conservative Reagan era. The film's adolescent vampire hunters proclaim themselves "fighters for truth, justice and the American way," establishing that the battle between vampire and human is a fight of ideologies as well as a physical struggle. Earlier in the film, Michael swallows David's essence - his blood - in an overtly homosocial bonding session that converts him to vampirism. Soon after - shock, horror - he shows up at home with his ear pierced. And it goes on...

This film is so bloody queer. Grab the popcorn, your boyfriend's hand, and have fun. Because even the tag line for this film is gay, gay, gay.

"Sleep all day. Party all night. Never grow old. Never die. It's fun to be a vampire."

If that doesn't sum up much of the gay lifestyle, I'll turn straight.

Now over here, you can find a great essay entitled Marginalisation and Eroticisation in Vampire Fiction which expands the discussion of homoeroticism to include what the author calls bieroticism.

Then there's the films I haven't seen, such as David DeCoteau's The Brotherhood (in which our vampire frat boys "wander around the house in their underwear looking sweaty and giving each other knowing looks...tender, sultry looks...").

In some of the films I have seen, but not revisted for years, there's all manner of same-sex shenannigans to enjoy.

But that, dear readers, I shall leave entirely to your imagination.

Feel free to check out some of the other vampire blog-a-thon entries:-

Over at Certifiably Creative, you can learn more about the Countess Elizabeth Bathory and some of the film's she's inspired.

Goatdog discusses The Fall of the House of Dracula

Cinema Fromage delves deep into the vampiric secrets of the 1970's, baby.

Over at My New Plaid Pants you can learn more about Bill Paxton in the superb Near Dark than you perhaps cared to know...

Critic After Dark looks at vampires in the Philippines.

And Biter, sorry Bitter Cinema, gets all You Tube on your throat.

Enjoy!
Posted by richardwatts at 10:23 am

That was really interesting. Pretty much all of Schumacher's films are laden with homo subtext.

I should try and seek out Fright Night and some of the others.

Kamikaze Camel is right... Schumacher has a talent to make everything look a bit gay... isn't it great? From Lost Boys, passing by Batman and finally "The Phantom of the Opera"...

Ok.. but back to your list: Great! I love every movie you mentioned...
The only flick I'm missing would be THE lesbian Vampire-Flick: The Hunger.

But perhaps that would have been a bit to obvious ;-)

Interesting Blog! I think I will keep on track!
Greetings from Germany!

"Would you please suck me dead, Mr Vampire?"